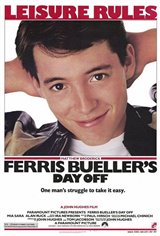 Ferris Bueller (Matthew Broderick) is charming and charismatic, and he doesn't feel like going to school today. So he sets up an intricate ruse to fool his parents and teachers, then invites his girlfriend Sloane (Mia Sara) and best friend Cameron (Alan Ruck) to join him for a day of adventure, including visiting a museum, attending a baseball game and joining in on a parade, as well as borrowing the beloved, classic Ferrari that belongs to Cameron's dad.

However, not everyone is fooled by Ferris' charm. His sister Jeanie (Jennifer Grey) is tired of Ferris getting away with everything and sets out to derail him. She's not the only one who feels something is not right. Ferris' principal, Ed Rooney (Jeffrey Jones) is determined to prove that Ferris isn't sick in bed. Even if it means visiting Ferris at home.