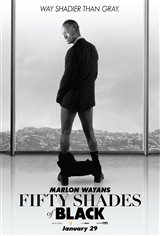 Hannah (Kali Hawk), an awkward student, goes to interview Christian Black (Marlon Wayans) at his Black Enterprises office building for her school newspaper. Despite the fact that he made his money through shady means (and a stint as a male stripper), she falls for him, but discovers he's not looking for romance.