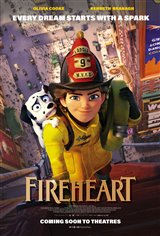 In 1930s New York City, Georgia Nolan (Olivia Wilde) idolizes her father Shawn (Kenneth Branagh), who is a fireman. Her lifelong dream is to become a firefighter herself, despite being told she can’t because she is a girl.

When firemen respond to a series of mysterious fires that are the work of an arsonist, set at Broadway theaters, the city's firemen begin to disappear. The Mayor of New York asks Shawn to investigate. Georgia eavesdrops on their conversation and plans to join her father’s team of firefighters in disguise as a man named Joe, in order to stop the arsonist and fulfill her destiny as a firefighter.