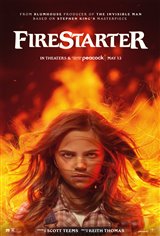 Charlie (Ryan Kiera Armstrong) is an 11-year-old girl with pyrokinetic abilities — she starts fires when her emotions get the best of her. As a result of being experimented on as college students, her parents, Vicky (Sydney Lemmon) and Andy (Zac Efron), also have special abilities. Andy has the power of psychological persuasion, but the toll it takes is hard on his body.

Although Andy tries to teach Charlie how to control her power, her emotions get in the way at times, leaving the outcome unpredictable. Andy and Vicky are afraid that when people find out what Charlie can do, the government will take her away and lock her up in a lab so she can be studied.

Based on the novel by Stephen King, this story was made into a film in 1984, starring Drew Barrymore as Charlie.