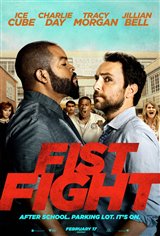 When mild-mannered high school English teacher Andy Campbell (Charlie Day) is accused by his much tougher colleague Ron Strickland (Ice Cube) of getting him fired, he is challenged to an after-school fist fight. It’s the last day of the school year and as word of the epic fight spreads, Andy is forced to take any help he can get in preparation for the throwdown in the school’s parking lot.

Andy receives sage advice from his loving wife (JoAnna Garcia), the school guidance counselor Holly (Jillian Bell) and Coach Rawlins (Tracy Morgan) for encouragement. Frightened for his life, Andy even ends up calling 911, only to be told that he needs to take his beating like a man.