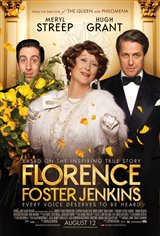 The true story of the legendary New York heiress and socialite, Florence Foster Jenkins (Meryl Streep), who in the early 1900s, obsessively pursued her dream of becoming a great singer—despite having a singing voice that was so out of tune and unable to hit the right notes that people found it hilarious.

Supported by her younger partner, actor St. Clair Bayfield (Hugh Grant), she mostly performed concerts for friends, but in 1944, she staged a public performance at the famed Carnegie Hall, that quickly sold out.