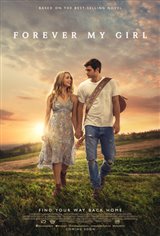 Country music superstar Liam Page (Alex Roe) left his bride-to-be, Josie (Jessica Rothe), at the altar eight years earlier, choosing fame and fortune instead. However, Liam never got over Josie and never forgot his Southern roots in the small community where he was born and raised.

When Liam returns to his hometown for a funeral, he comes face-to-face with Josie, who has never forgiven him. Josie has her own business and a seven-year-old daughter, Billy (Abby Ryder Fortson), who recognizes Liam as "that country star my momma listens to." Liam suspects Billy is his daughter, and when he asks Josie, she admits she discovered she was pregnant two weeks after the day he ran out on her.

Liam decides he wants to be part of Billy's life, and Josie reluctantly agrees, but makes it clear that she no longer has feelings for him herself. Meanwhile, his manager puts the heat on Liam when he misses a concert date, as he puts his personal life ahead of his professional one for the first time in his life.
Director:
Bethany Ashton Wolf
Studio:
Elevation Pictures
Producer(s):
Jennifer Monroe, Mickey Liddell, Pete Shilaimon
Cast:
Alex Roe, Jessica Rothe, John Benjamin Hickey, Abby Ryder Fortson
Writer(s):
Bethany Ashton Wolf
Official Site:
forevermygirlthemovie.com