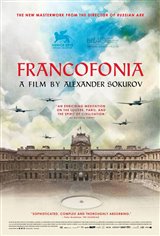 Sokurov also shows how France's reverence for culture has been unequalled by any other European nation, charting its evolution from the Middle Ages onward as it rose through times of war and peace to its peak as the dominant cultural hub in the heart of Europe.