From the Land of the Moon 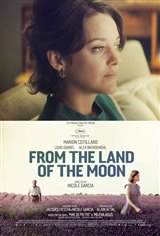 Gabrielle (Marion Cotillard) is the eldest daughter of a good French family from a small village in the south of France. Her parents threaten to send her to a mental institution unless she marries José, a Spanish farm worker. Even though Gabrielle tells him she will never love him, he still wants to marry her. The couple takes up residence in La Ciotat, where José sets up a small masonry business.

José, who loves Gabrielle, sends her to a spa in the Alps for six weeks to heal her kidney stones. While there, Gabrielle meets André, a wounded soldier who has returned from the war in Indochina. She falls madly in love with him, but because she’s married, André is reluctant to enter into a relationship with her.