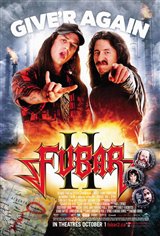 FUBAR II is the long anticipated sequel to the 2002 cult hit Fubar which CNN called "the quintessential Sundance film." Fubar went on to become a perennial favourite across North America.

The story starts in Calgary where the boys are tired of trying to give'r while barely scraping by, when their old buddy and party leader, Tron (Andrew Sparacino) hooks them up with jobs in Fort McMurray. Before long they are rolling in dough and good times.

Flush with money and confidence, Terry starts dating Trish (Terra Hazelton), a local waitress, and things get serious in a hurry. Meanwhile, Dean is playing up the part of the cancer survivor, and upon hearing about the glories of workers' compensation, purposely bungs up his leg in an attempt to qualify. When Terry moves in with Trish, Dean does his best to save his buddy from swapping the banger life for domestic captivity.