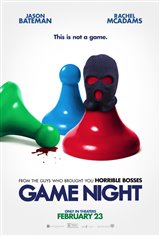 Max (Jason Bateman) and Annie (Rachel McAdams) meet during Trivia Death Battle night at their local bar and fall madly in love. They get married and hold a weekly couples game night at their house. Max’s charismatic and wealthy brother, Brooks (Kyle Chandler), arranges a murder mystery party at his luxurious house and tells everyone that during the evening, someone will be "taken," and whoever finds the person gets the keys to his stingray. However, when Brooks is kidnapped in front of everyone by brutal thugs, they believe it's all part of the game… but is it?

As the three couples set out to solve the case, over the course of the night, they begin to realize that the "game" may not be going exactly to play and that Brooks may not be exactly what he appears to be. Max, Annie and their friends find themselves increasingly in over their heads as each twist leads to another unexpected turn. With no idea what the rules are and who the players are, this could turn out to be the most fun night they’ve ever had… or it could be game over.