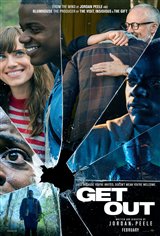 A young man named Chris (Daniel Kaluuya) is preparing to meet his girlfriend Rose's (Allison Williams) parents for the first time. However, he is skeptical of the introduction because Rose, who's white, hasn't told her parents that he is black. While she sees no importance in the color of his skin, he worries that it may be an issue.

As they make their way to Rose's family estate, he is immediately subjected to racial profiling by a cop; but Rose comes to his defense. When they arrive at the vast estate, Rose's parents (Catherine Keener and Bradley Whitford) are friendly, if a little awkward. AS the visit drags on, Chris begins to notice that all the African Americans in the town are acting strangely — almost as if they're hypnotized — and soon uncovers a twisted plot that may leave him at the mercy of the townsfolk.