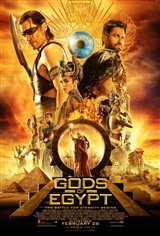 Set, the God of Darkness (Gerard Butler), defeats rival deity Horus (Nikolaj Coster-Waldau) in a vicious duel and blinds him before taking over Egypt and enslaving his people. A mortal named Bek (Brenton Thwaites) allies himself with Horus in an attempt to save humanity.