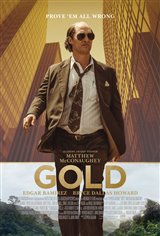 Despite being in the gold business, Kenny Wells (Matthew McConaughey) has never been a lucky man, and is so desperate for cash that he resorts to taking his girlfriend's jewelry. But after having a dream that he will find gold in Indonesia, he decides to see if he can change his luck.

He teams up with geologist Michael Acosta (Édgar Ramírez), who's equally unlucky, but despite that, the two men set off to search for gold deep in the uncharted jungles of Indonesia. After initially finding nothing, they soon miraculously discover a gold mine. They start receiving business opportunities, and make over a whopping $30 billion. But many will stop at nothing to have piece of his profit, while Kenny's relationship with longtime girlfriend Kay (Bryce Dallas Howard) is pushed to the breaking point.