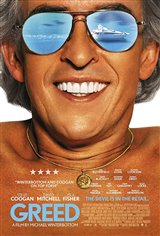 The fast-fashion industry is skewered in this scathing farce about retail billionaire Sir Richard McCreadie (Steve Coogan). When it comes to light how McCreadie achieved his wealth and the grotesque inequality between himself and the female garment workers who toil on his trendy clothing line, things soon start to come undone.

As McCreadie finds himself in court with his own reckoning upon him, he makes one last ditch effort to repair his image and standing in the public. He does so in the only way he knows how: by throwing a lavish party with excessive displays, funded by his own greed.