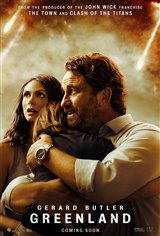 When scientists discover that a comet is going to hit Earth in a few days, and will likely cause the extinction of humanity, the only hope of survival is to take shelter.

Structural engineer John Garrity (Gerard Butler), his wife Allison (Morena Baccarin), and their young son Nathan (Roger Dale Floyd) are among the few families chosen by the government to get on planes headed to Greenland, where there are bunkers.

However, when they arrive at the airfield, they discover that Nathan's diabetes medicine fell out in the car and John races back to get it. Meanwhile Allison runs into a loophole and is told that she and Nathan aren't allowed on the plane. In the chaos, they get separated from John and try to find their way back together.