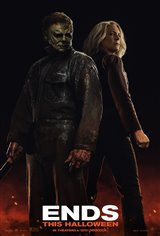 Laurie Strode (Jamie Lee Curtis) is living with her granddaughter, Allyson (Andi Matichak), and working on her memoir after the events of Halloween Kills (2021). Despite Michael Myers' four-year disappearance, he still haunts Laurie in the aftermath of his decades-long attacks. She attempts to heal, but when Corey Cunningham (Rohan Campbell) becomes the prime suspect in the murder of the boy he was babysitting, Laurie is unable to distance herself from Michael Myers.

In this haunting finale of the trilogy, Laurie deals with post-traumatic stress as the only living survivor of Michael Myers' 1978 killing spree in her final showdown with the masked killer.