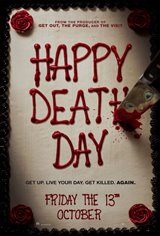 When college student Tree (Jessica Rothe) is woken up by the sound of her cell phone ringing, she's surprised to find herself in a strange dorm room, greeted by a young man named Carter (Israel Broussard). She makes her way home in her party clothing, where her roommate advises her to switch to water next time and reminds her not to be late for her own birthday party.

Tree goes to a nightclub to celebrate her birthday, and winds up in a dorm room, where a masked madman stabs her. She wakes up in the same dorm room, reliving the day over again. Thinking she can stop her murder from happening, she stays home, only to have the murderer track her down there and the next morning, she again wakes up in the dorm room. When she tells Carter what's going on, he advises her to try to solve the murder, since she has unlimited time to figure out the identity of the masked killer.