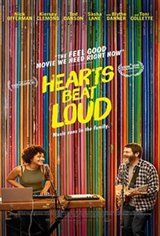 Hearts Beat Loud is a lighthearted drama about Frank Fisher (Nick Offerman) and his daughter, Sam Fisher (Kiersey Clemons). Frank and Sam live in the hip Brooklyn neighborhood of Red Hook. Frank is under financial pressure to close his vintage record shop, while Sam is about to head off to college.