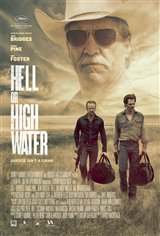 In a story where the Old West meets the New West, two brothers - Toby (Chris Pine), a straight-laced and divorced father trying to provide for his son, and Tanner (Ben Foster), a short-tempered ex-con - rob branch after branch of the bank that's foreclosing their family land.

The pair seem to be getting away with their calculated crimes until they reach the radar of a foul-mouthed Texas Ranger (Jeff Bridges), who's determined to crack one last case before he retires. Tensions come to a head and one final showdown will either grant the Ranger his victory or the brothers their freedom.