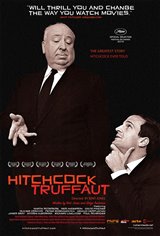 French director François Truffaut persuaded critically-acclaimed British director Alfred Hitchcock to sit with him in 1962 for a week long interview in which the Hitchcock would share with his young admirer the secrets of his cinema.

Based on the original recordings of this meeting — which were used to produce the book Hitchcock/Truffaut — this film illustrates the greatest cinema lesson of all time and plunges us into the world of the Oscar-nominated genius behind films such as Psycho, The Birds and Vertigo.