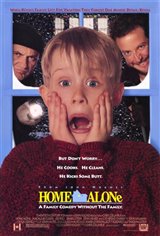 Kevin McCallister is the youngest of five and always tormented by his brothers and sisters. His family is all packing and getting ready for their flight to Paris, France. When Kevin gets into a fight with his brother, he is sent to bed on the third floor, where he wishes his whole family would disappear.

The next morning, the McCallister family wake up late, due to a power outage resetting all of their alarms. In all of the hustle and bustle, the family forgets to awaken Kevin, who is still on the third floor sound asleep. When he finally wakes up, he is overjoyed to have the whole house to himself.

Soon, he finds himself in trouble when he realizes two burglars are up to no good and planning to rob his house. He is forced to create hilarious booby traps and pranks in an effort to save his house and stay safe while awaiting the arrival of his mother and the rest of the family.