Honey, I Shrunk the Kids 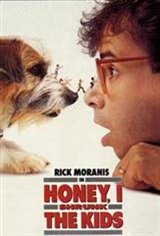 Erstwhile inventor Rick Moranis has been experimenting with an electro-magnetic shrinking machine. He leaves the device unattended in his attic; shortly afterward, it is accidentally activated. Alas, the demon machine is aimed at Moranis' children, as well as the son of neighbor Matt Frewer. The kids, shrunk to 1/4-inch height, are tossed into the trash bin by the unwitting Moranis. For the rest of the film, our teeny-tiny protagonists attempt to gain their parents' attention--and to survive the wilds of the backyard, where all sorts of dangers, from bumblebees to lawnmowers, threaten their well-being. Honey, I Shrunk the Kids features Marcia Strassman as Moranis' wife, and juvenile players Robert Oliveri, Kristine Sutherland, Thomas Brown, Jared Rushton and Amy O'Neill. The visual effects are the handiwork of such masters as Joe Johnston, Phil Tippett, and David Allen. When originally released to theatres, Honey, I Shrunk the Kids was double-billed with the Roger Rabbit cartoon Tummy Trouble; this is how it is presented on videotape as well. The film (the live-action one, that is) prompted a 1992 sequel, Honey, I Blew Up the Kid.