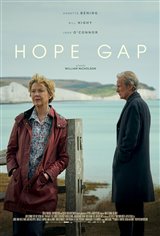 Grace (Annette Bening) believes she's in a happy, loving relationship with her husband Edward (Bill Nighy), so when he finally tells her how unhappy he is after 29 years, and that he's leaving her for another woman, she's devastated.

The ensuing emotional fallout affects their only grown son (Josh O'Connor), who tries to be understanding for both parents. Feeling lost in her new, single status in her small seaside town, Grace tries to regain her footing.