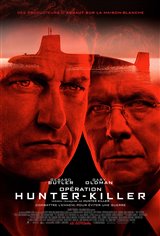 The Russian President has been kidnapped and is being held captive by a rogue general in an attempt to start World War III.

Meanwhile, Captain Joe Glass (Gerard Butler) heads to the location where a new Russian sub sank in a thousand feet of freezing water under a polar ice cap, only to be followed by an American nuclear submarine.

He soon discovers the incident wasn't an accident and teams up with U.S. Navy Seals to rescue the Russian President.

Based on the novel Firing Point by Don Keith and George Wallace.