I Propose We Never See Each Other Again After Tonight 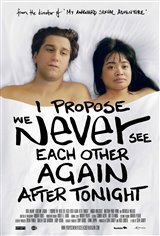 But when he decides to go away on a road trip, she feels it's time to meet other boys and meets some through a dating app. When she hooks up with some of them and Simon finds out what she's done, things become significantly more complicated.