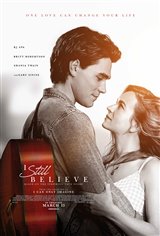 The true life story of Christian music megastar Jeremy Camp (K.J. Apa), from his teenage years through to his relationship with Melissa Henning (Britt Robertson).

Just before they were to be married, she was diagnosed with ovarian cancer, and during their honeymoon, they were informed that it had spread.

This film, which also stars Gary Sinise and Shania Twain as Jeremy's parents, tells their remarkable journey of love and loss, which proves there is always hope in the midst of tragedy and that faith tested is the only faith worth sharing.