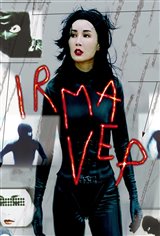 Written and directed by Olivier Assayas, Irma Vep tells the story of has-been French filmmaker René Vidal (Jean-Pierre Léaud). In an attempt to reinvigorate his career, Vidal decides to remake Les Vampires, the classic silent serial featuring the adventures of jewel thief Irma Vep. Playing herself, actress Maggie Cheung is cast as the lead, joining Vidal on a chaotic set where he gets little respect from the rest of the cast and crew. Speaking no French, Cheung finds herself fending off the advances of lesbian costumer Zoé (Nathalie Richard), sticking up for Vidal, and becoming so immersed in her role that she burgles the guests of her hotel while in costume.