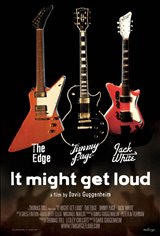 Rarely can a film penetrate the glamorous surface of rock legends. It Might Get Loud tells the personal stories, in their own words, of three generations of electric guitar virtuosos—The Edge (U2), Jimmy Page (Led Zeppelin), and Jack White (The White Stripes). It reveals how each developed his unique sound and style of playing favorite instruments, guitars both found and invented. Concentrating on the artist's musical rebellion, traveling with him to influential locations, provoking rare discussion as to how and why he writes and plays, this film lets you witness intimate moments and hear new music from each artist. The movie revolves around a day when Jimmy Page, Jack White, and The Edge first met and sat down together to share their stories, teach and play.