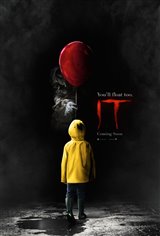 Every 27 years, an ancient shape-shifting predator (Bill Skarsgård) emerges from the sewers to feed on innocent children by preying on their deepest fears in the town of Derry, Maine.

A group of seven children, who are considered misfits, form a group called the "Losers Club." They soon realize that they've all had encounters with a demonic entity that appears in various forms, but primarily in the shape of a clown named Pennywise.

Not knowing what to call the entity, they refer to it as "It" and believe It is responsible for the recent murders of a number of children in their town.

Based on the novel by Stephen King.