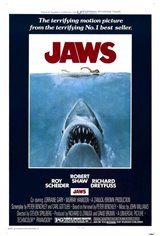 Amity Island is a small community with a new police chief, Sheriff Martin Brody. When Brody discovers the remains of a shark attack victim, he closes down the beaches, which brings in the island's main source of business. The mayor and business people aren't thrilled and force the police chief to them reopen.

Unfortunately, Brody is swept with regret after another young boy is killed the following weekend. Amity then becomes taken over by amateur shark hunters who want the cash reward put out by the boy's mother, for the capture of the Great White shark who killed her son.