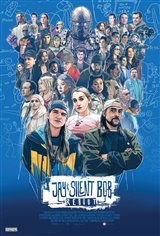 When stoners Jay (Jason Mewes) and Silent Bob (Kevin Smith) find out that Hollywood is rebooting an old movie based on their superhero alter-egos Bluntman and Chronic again, the clueless duo embark on another cross-country mission to stop the film from happening.