Julie and the Phantoms (Netflix) 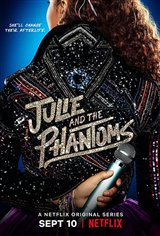 High schooler Julie (Madison Reyes) suffers a creative block with her music following the death of her mother. That is, until the ghosts of a teenage boy band called the Phantoms appears in her studio. Soon enough, Julie and the band begin to rehearse together, and Julie becomes their lead singer.

People can see the band when they perform, but once they finish, they vanish just like a hologram act. As the band helps Julie find her voice again, they also need Julie's help to wrap up their unfinished business on Earth so they can cross over to the afterlife.