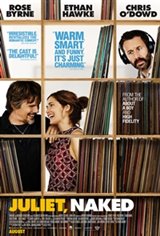 Annie (Rose Byrne) lives in a small British village near London. For the past 15 years, she's been in a relationship with Duncan (Chris O'Dowd), who never stops talking about his obsession — obscure rocker Tucker Crowe, who hasn't released any new music or performed live for years. Rose is quite frankly, sick of hearing about Tucker Crowe and she's just about had it with Duncan.

When an acoustic demo of Tucker's hit record from 25 years ago surfaces, Duncan is elated and posts a glowing review on his Tucker Crowe fan site. Annie listens to it and is completely underwhelmed. In turn, she writes a scathing review of the album, which prompts the unpretentious Tucker to write her an email, telling her he agrees with her assessment. They begin corresponding and tell each other about their lives. Tucker devotes his life to raising his young son, but is planning a trip to England and wants to meet Annie, who is astounded by this turn of events.
Director:
Jesse Peretz
Studio:
Elevation Pictures
Producer(s):
Albert Berger, Barry Mendel, Jeffrey Soros, Judd Apatow, Ron Yerxa
Cast:
Rose Byrne, Ethan Hawke, Chris O'Dowd
Writer(s):
Evgenia Peretz, Jim Taylor, Tamara Jenkins
Official Site:
julietnakedfilm.com