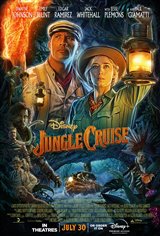 Based on Disney's theme park ride in which a small riverboat takes travelers through a jungle filled with animals and reptiles.

Dr. Lily Houghton (Emily Blunt) gets her hands on a mystical arrowhead that provides the only way to locate an ancient tree in South America with flowers that have the power to save lives. However, also hoping to get his hands on the arrowhead is Prince Joachim (Jesse Plemons), who wants to use the tree's power to help Germany win the war.

Along with her pampered brother, MacGregor (Jack Whitehall), Lily hires reluctant river guide Frank Wolff (Dwayne Johnson) to take her downstream on her quest. The unlikely duo encounter plenty of danger and obstacles along the way that are hidden in the deceptive beauty of the lush rainforest.