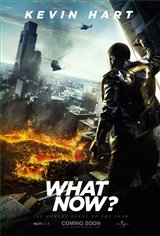 In the follow-up to 2013's Let Me Explain—the third highest-grossing live stand-up comedy movie of all time—Kevin Hart once again takes center stage, only this time in front of 50,000 people at Philadelphia's Lincoln Financial Field, making it the first time a comedian has performed to a sold-out football stadium.

Some of his jokes range from topics such as iPhone's program Siri, kids these days having no edge, and airport washroom problems.