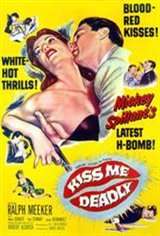 Regarded by many critics as the ultimate film noir, and by many more as the finest movie adaptation of a book by Mickey Spillane, Kiss Me Deadly stars Ralph Meeker as Spillane's anti-social private eye Mike Hammer. While driving down a lonely road late one evening, Hammer picks up a beautiful blonde hitchhiker (Cloris Leachman), dressed in nothing but a raincoat. At first, Hammer assumes that the incoherent girl is an escaped lunatic; his mind is changed for him when he and the girl are abducted by two thugs. The men torture the girl to death as the semiconscious Hammer watches helplessly. He himself escapes extermination when the murderers' car topples off a cliff and he is thrown clear. Seeking vengeance, Hammer tries to discover the secret behind the girl's murder. Among those who cross his path in the film's tense, tingling 105 minutes are a slimy gangster (Paul Stewart), a turncoat scientist (Albert Dekker), and the dead woman's sexy roommate (Gaby Rodgers). All clues lead to a mysterious box -- the Great Whatsit, as Hammer's secretary Velda (Maxine Cooper) describes it. Both the box and Velda are stolen by the villains, at which point Hammer discovers that the Whatsit contains radioactive material of awesome powers. The apocalyptic climax is doubly devastating because we're never quite certain if Hammer survives (he doesn't narrate the story, as was the case in most Mike Hammer films and TV shows). Director Robert Aldrich and scriptwriter Jack Moffit transcend Kiss Me Deadly's basic genre trappings to produce a one-of-a-kind melodrama for the nuclear age.