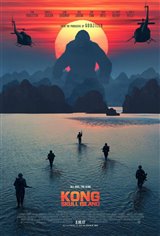 In the 1970s, a diverse team of explorers (including Tom Hiddleston, Brie Larson, and Samuel L. Jackson) is brought together to venture deep into an uncharted but beautiful isolated island that goes by the name of Skull Island, in the Indian Ocean.

They soon discover that the island is home to a wonder of colossal proportions — the gigantic and prehistoric ape known as King Kong, who possesses great strength and semi-human intelligence. As the team ventures deeper into the primate's territory, it becomes clear that they have more to fear than Kong, as there may be more terrifying, blood-thirsty predators lurking inhabiting the island.