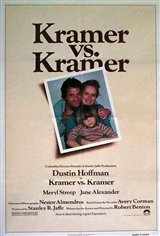 Ted Kramer (Dustin Hoffman) works hard at his advertising job and feels elated when he's assigned to a big, important account. He comes home to share the news with his wife Joanna (Meryl Streep), but she tells him she's leaving him after years of feeling neglected. She walks out, leaving their son Billy (Justin Henry) with Ted. Billy misses his mom and can't understand why she left him, but gradually, he and his father form a strong bond.

Fifteen months later, Joanna breezes back into their lives and demands to have Billy back, but Ted doesn't want to lose his son. He loves the boy and has sacrificed much to have the time to raise him as a single father. Billy doesn't want to go with his mother, who essentially abandoned him. Ted is forced to go to court to fight for custody of his son.