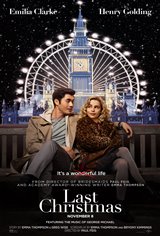 Kate (Emilia Clarke), an aspiring singer, works as an elf at a year-round Christmas store. Hving fallen out with her mother (Emma Thompson), Kate has decided to camp out on friend's sofas, that is, when she doesn't find a guy in a bar at whose place she can crash. The bad decisions she's made in her life tend to leave her glum, despite the beautiful displays and sounds of cheer.

When she bumps into Tom (Henry Golding), a happy-go-lucky guy who seems almost too good to be true, she tries to keep him at arm's length, but soon falls for his charm. However, Tom, who claims to not carry a phone, is elusive and the only time she sees him is when he shows up at the Christmas store. However, whenever he's around, he lifts her spirits and even helps her get ready for an audition. Soon, she realizes she's looking forward to seeing him, even though he tries to get her to go home and make up with her family. For the first time in a long while, Kate may find herself on the path to becoming a healthy person.