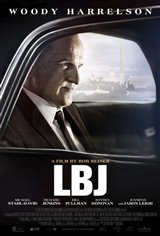 This fascinating biopic centers around the complex and controversial Vice President Lyndon B. Johnson (Woody Harrelson), who was thrust into presidency after President John F. Kennedy (Jeffrey Donovan) was assassinated on November 22, 1963. This left him struggling to rescue a nation, and pass Kennedy's historic Civil Rights Act. LBJ not only follows his days as president, but is also an intimate look into his early years.