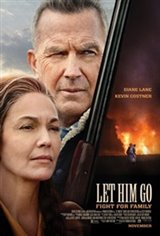 Following the loss of their son, retired sheriff George Blackledge (Kevin Costner) and his wife Margaret (Diane Lane) leave their Montana ranch to rescue their young grandson in the Dakotas. Their daughter-in-law Lorna (Kayli Carter) has married again and her new husband, Donnie Weboy (Will Brittain), openly beats both her and the little boy.

When they discover that the Weboys are a dangerous family with a reputation for violence, George and Margaret try to convince Lorna to come with them, but she fears Donnie and his mother (Lesley Manville) will kill her if she tries to leave. The Blackledges quickly realize that their quest will prove more difficult and deadly than they could have anticipated.