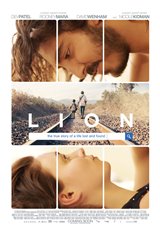 A five-year-old Indian boy, Saroo, goes with his older brother, Guddu, to beg for money at a train station. When Saroo gets separated from his brother, he climbs on a train to search for him and winds up many miles away from his home.

Unable to tell the police exactly where he's from, the little boy is eventually declared an abandoned child. He ends up at the Indian Society for Sponsorship and Adoption, where's he's soon adopted by an Australian couple (Nicole Kidman, David Wenham).

When Saroo grows up and becomes a young man (Dev Patel), he wants to find his biological family and uses Google Earth to help him narrow his search.

Based on the autobiographical book A Long Way Home by Saroo Brierley.