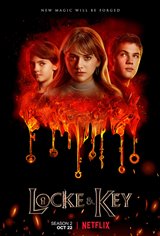 Along with their mother, the three Locke siblings (Connor Jessup, Emilia Jones, Jackson Robert Scott) move into their ancestral home, Keyhouse, after their father, who was a guidance counselor at a high school, was murdered by a student under mysterious circumstances. They soon discover the home is full of magical keys that may be connected to their father's death.

As the Locke children explore the different keys and their unique powers, a mysterious demon awakens — who will stop at nothing to steal them.

Based on the best-selling comic book series by Joe Hill and Gabriel Rodriguez.

Filmed in Ontario with some exteriors filmed in Nova Scotia. Several of the cast members are Canadian.