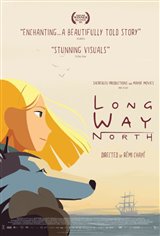 Set in Saint Petersburg in 1882, a young girl named Sasha has dreams far beyond her life as a Russian aristocrat. She longs for the Great North, where her Arctic explorer grandfather, Olukine, has mysteriously disappeared. Armed with only a suitcase and her unwavering determination, Sasha goes on an epic adventure to the North Pole to find her lost granddad.