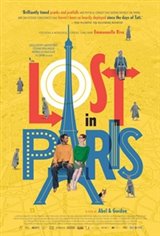 When librarian Fiona receives a troubling letter from her 93-year-old Aunt Martha in Paris, Fiona rushes to France and finds that her aunt has disappeared. Once in Paris, Fiona runs into a genial tramp who insinuates himself into her life in this amusing new feature from the directorial team behind RiverRun favorites Rumba and The Fairy.