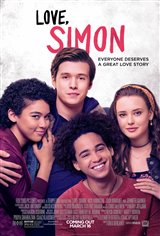 Simon Spier (Nick Robinson) is living a normal life with his parents (Josh Duhamel, Jennifer Garner) and sister (Talitha Eliana Bateman). He attends high school and has a close group of friends: Leah (Katherine Langford), Nick (Jorge Lendeborg Jr.) and Abby (Alexandra Shipp). But Simon has one big secret that no one knows about — he is gay.

He starts writing emails to an anonymous classmate online, who is also gay. He slowly starts falling for this anonymous friend. They exchange emails on a daily basis, discussing the possibility of coming out to their parents and their close friends, but fear they’ll be ridiculed by the other students.

When someone finds out his secret and threatens to reveal it, Simon feels like his world might fall apart.