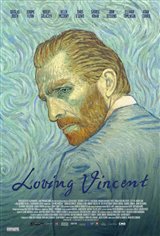 The tragic story of beloved Dutch artist Vincent Van Gogh (Robert Gulaczyk). On July 27, 1890, his gaunt figure stumbled down a quiet street at twilight in the small French country town of Auvers, where he lived. His hands were pressing on a fresh bullet wound leaking blood from his belly. Vincent, at the time a little known but prolific artist, was in trouble.

This movie tells his story up to that point, including his struggles with insomnia, mental illness, depression, malnutrition and alcoholism. It also delves into the mystery behind his death.