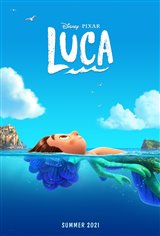 Luca (Jacob Tremblay) is a young boy who is secretly a sea monster from another world below the water's surface. One summer, he arrives in a seaside town on the Italian Riviera, where he meets two of his friends, Giulia (Emma Berman) and Alberto (Jack Dylan Grazer). The three of them relate to each other as underdogs, and as underdogs, they make a promise to look out for each other. Unknown to Giulia, both Luca and Alberto are sea monsters from the same world.

The three of them then decide that they want to have an adventure together, to explore every road and see the entire world. However, the townsfolk are superstitious and are fearful of sea monsters, meaning Luca and Alberto must keep their secret to protect not only themselves, but also Giulia, so that they can have the adventure they long to experience.