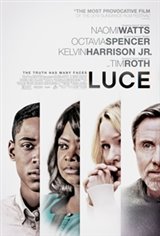 Amy (Naomi Watts) and Peter Edgar (Tim Roth) adopted their son from war-torn Eritrea 10 years earlier. With a lot of love and structure in his life, Luce Edgar (Kelvin Harrison Jr.) has become a model student beloved in his community of Arlington, Virginia. His African-American teacher, Harriet Wilson (Octavia Spencer), takes a special interest in him.

When he's asked to write an essay in the voice of a historical 20-century figure, Luce turns in a paper in which he asserts violence is a necessary cleansing force. Harriet brings it to the attention of his parents, who question him about it. Luce tells them Harriet has it in for him. After Luce talks to his teacher about his paper, she says she felt threatened by him. When her home is vandalized, she brings it to the attention of the authorities. Soon, his parents don't know who to believe.